The system minimally requires a gyroscope, accelerometer, magnetometer (compass) and barometer. A GPS or other positioning system is needed to enable all automatic modes, and some assisted modes. Fixed wing and VTOL-vehicles should additionally include an airspeed sensor (very highly recommended).

The minimal set of sensors is incorporated into Pixhawk Series flight controllers (and may also be in other controller platforms). Additional/external sensors can be attached to the controller.

Below we describe some of the sensors. At the end there are links to information about sensor wiring.

Pixhawk-series controllers include an internal compass. This may be useful on larger vehicles (e.g. VTOL) where it is possible to reduce electromagnetic interference by mounting the Pixhawk a long way from power supply lines. On small vehicles an external compass is almost always required.

We recommend the use of an external "combined" compass/GPS module mounted as far away from the motor/ESC power supply lines as possible - typically on a pedestal or wing (for fixed-wing). Airspeed sensors are highly recommended for fixed-wing and VTOL frames.

They are so important because the autopilot does not have other means to detect stall. For fixed-wing flight it is the airspeed that guarantees lift not ground speed! 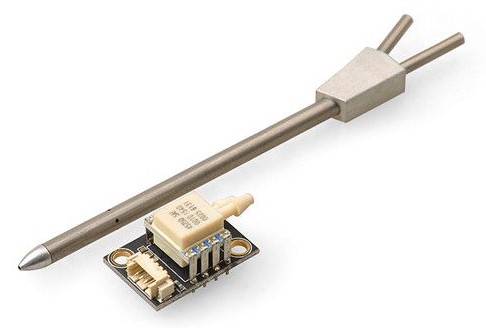 Tachometers (revolution-counter sensors (opens new window)) are highly recommended for rotor-wing frames because they allow the autopilot to detect stall or another rotor failure (for rotor-wing flight it is the rotation of blades that guarantees lift not airspeed or ground speed). Optical Flow sensors use a downward facing camera and a downward facing distance sensor for velocity estimation. PX4 blends the sensor output with information from other position sources (e.g. GPS) to provide a more accurate position lock. This sensor can be used indoors, when no GPS signal is available. Sensor wiring information is usually provided in manufacturer documentation for flight controllers and the sensors themselves.