Trims are used to calibrate the control surfaces at trim conditions (relative airspeed, air density, angle of attack, aircraft configuration, etc.). A properly trimmed aircraft flying at trim conditions will keep its attitude without requiring any control inputs from the pilot or the stabilizing computer.

The Basic trimming section explains the purpose of each trim parameter and how to find the correct value. The Advanced Trimming section introduces parameters that can be set to automatically adjust the trims based on the measured airspeed and flap position.

There are several parameters an operator might want to use in order to properly trim a fixed-wing aircraft. An overview of those parameters and their use case is shown below:

The correct order to set the above parameters is:

Step 3 can be performed before step 2 if you don't want to have to look at the log, or if you feel comfortable flying in manual mode. You can then trim your remote (with the trim switches) and report the values to TRIM_PITCH (and remove the trims from your transmitter) or update TRIM_PITCH directly during flight via telemetry and QGC.

Given that the downward pitch moment induced by an asymmetric airfoil increases with airspeed and when the flaps are deployed, the aircraft needs to be re-trimmed according to the current measured airspeed and flaps position. For this purpose, a bilinear curve (see figure below) function of airspeed and a pitch trim increment function of the flaps state can be defined using the following parameters: 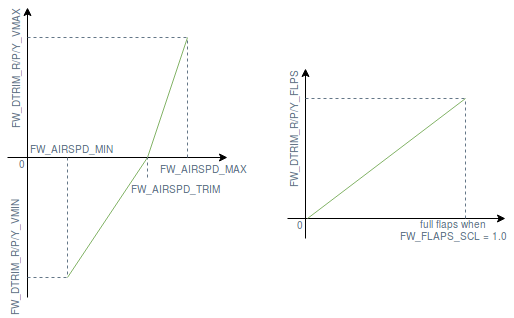 If a scale factor different from 1.0 is used for the flaps (parameter FW_FLAPS_SCL), the trim increment added by the FW_DTRIM_R/P_FLPSis also scaled by the same factor.