Simulation-In-Hardware (SIH) is an alternative to Hardware In The Loop simulation (HITL) for a quadrotor. In this setup, everything is running on embedded hardware - the controller, the state estimator, and the simulator. The Desktop computer is only used to display the virtual vehicle. 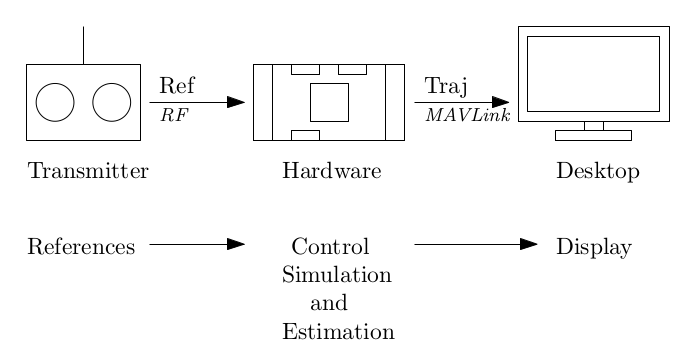 The SIH can be used by new PX4 users to get familiar with PX4 and the different modes and features, and of course to learn to fly a quadrotor with the real RC controller.

The dynamic model is described in this pdf report (opens new window).

To run the SIH, you will need a flight controller hardware (e.g. a Pixhawk-series board). If you are planning to use a radio control transmitter and receiver pair you should have that too. Alternatively, using QGroundControl, a joystick (opens new window) can be used to emulate a radio control system.

The SIH is compatible with all Pixhawk-series boards except those based on FMUv2. It is available on the PX4-Autopilot master branch and release versions v1.9.0 and above.

Running the SIH is as easy as selecting an airframe. Plug the autopilot to the desktop computer with a USB cable, let it boot, then using a ground control station select the SIH airframe. The autopilot will then reboot.

When the SIH airframe is selected, the SIH module starts by itself, the vehicle should be displayed on the ground control station map.

The simulated quadrotor can be displayed in jMAVSim from PX4 v1.11.

The SIH was developed by Coriolis g Corporation, a Canadian company developing a new type of Vertical Takeoff and Landing (VTOL) Unmanned Aerial Vehicles (UAV) based on passive coupling systems.

Specialized in dynamics, control, and real-time simulation, they provide the SIH as a simple simulator for quadrotors released for free under BSD license.